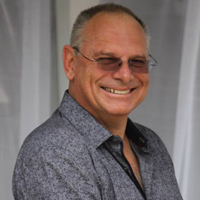 Stephan returned to community theatre in 2004 which lead to a meeting with the talented playwright and director Di Day whom recruited Stephan as her Stage Manager for her production produced at The Blue Room (WA) in the same year.

Inspired by Di’s success, Stephan went on to write many plays including the Warmed Up series “Death Warmed Up”, “Meals Warmed Up” to name a couple, which have all been performed at the KADS Theatre in Kalamunda, Western Australia.

Stephan is a committed playwright, director and actor and has performed in productions at KADS, Garrick, Blak Yak and Marloo theatres, having also received numerous nominations and awards for his writing, set design and acting.