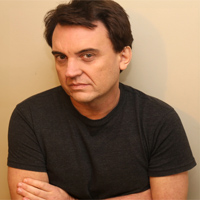 Born in Perth, Western Australia, Chris Thomas is a writer, actor, journalist and broadcaster who has developed diverse experience in these areas over several years.

He has many eclectic acting credits to his name and broad journalistic experience, working for mainstream newspapers, independent publications and freelancing for numerous titles, as well as extensive work in media relations and flexing his dulcet tones as a radio announcer.

Chris is the author of the novel Journo’s Diary and the Doctor Who short story One Step Forward, Two Steps Back, as well as the short story Vampires of the Night, a spin-off using characters from the classic era of Doctor Who (both published in official licensed collections). His plays SMS Mess, Which One?, Reality Matters, Pickles, The Bonza Land of Oz, Appetite for Destruction, Who’s Your Daddy? and King Bling have been published in the collection SMS Mess and other plays.

The plays have received various accolades, including:

Chris himself won an excellence in performance award at the 2001 South West Drama Festival for his role in the play Disposal, followed by a best supporting actor award in 2008 for The Return. In 2013, he received the Peter Kemeny Achievement Award at Dramafest, Western Australia’s annual state drama festival, for adapting, co-directing and appearing Jean-Paul Sartre’s No Exit.